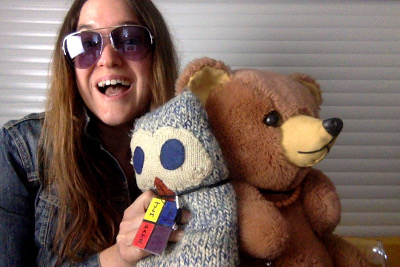 About a week before the tour started, it was clear that we weren't going to be able to gig in real life any time soon. I had an album I wanted to release, and rather than wait for it to go stale, I thought we could go on tour around the world and try out this live streaming lark that every musician and his teddy bear is getting stuck into.

We could have just tried one to start with, but oh no, I had to go the whole hog and do 24 all at once, one for every time zone in the world.

I wanted to play in London on my birthday, which would launch the new album Forthright, and we decided that it was always better to go west to avoid jetlag. I decided on a somewhat early showtime, 7pm, which would be the same every night, as on a real tour, and we'd have arrival, load in and soundcheck before the show, giving backstage access.

And so it ended up that we'd start at 3am in San Francisco, at a venue which has now closed down but which we played with Holy Holy in 2016. We picked places that looked interesting, or where we'd been before, or obvious grand locations. Some were tiny bars on military bases, others were famous concert halls. I've played this range in real life and I always love the variety.

It's given us a sense of adventure during lockdown. We got so excited that we were going on tour, it was ridiculous, and I finally discovered my long-dormant imagination. Details developed, and we recruited a crew from our cuddly toys.

We've confused the audience, made them chase our showtimes, not allowed the shows to linger on Youtube (although the trailers are still there), and fostered a little band of fans, relatives and friends who chat to each other during the gig (not allowed in real life) and make the gigs feel totally real. In fact, this tour has been real except for the lack of actual travel, visas, hotels, and great expense!

My mum keeps asking why I've made it so arduous for ourselves, playing at stupid o'clock in the morning, but sometimes life is about challenging yourself and doing idiotic things, and I'm so glad we've done it!


Anthony's guide to the tech 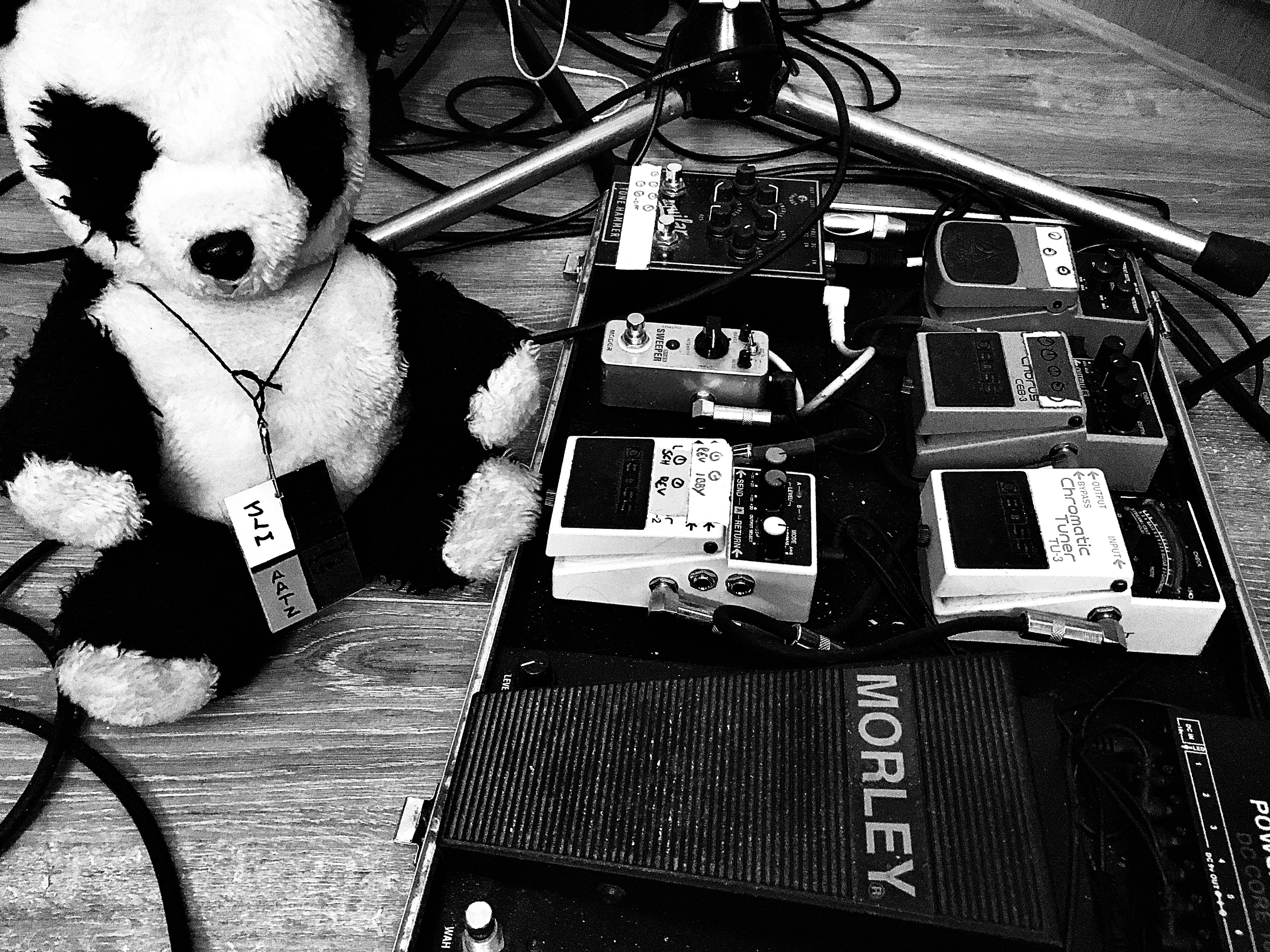 I'm Anthony, and I'm the behind the scenes geezer who sets the guitars and backline up on Jessica's World Time Zone Tour. As I've got five minutes, I thought I'd answer the thousands of tweets and messages I get about the gear Jessica and Chris use.

For the first few shows, Jessica has been using her black Auden acoustic guitar. She's lucky enough to be sponsored by Auden, who kindly provided her with this beauty a couple of years ago. This has accompanied her on a couple of Holy Holy support shows, as well as all of her own shows.

J also has her mum's Martin but we haven't got round to getting that out of the case yet - I find this hard as I have very small hands. Chris and Jess have both suggested I don't have opposable thumbs, but being a panda I do have a sixth toe which I sort of use like a thumb. But my hands are very small.

We Direct Inject (DI) Jessica directly into the desk.

Jessica uses her pedalboard which has the go-to Boss TU3 tuner and her TC Electronics chorus pedal. We had this shipped out to us in the second quarter of the tour

Her mic is a standard SM58, which has been her go to since Chris it bought it for her (the old romantic) back in the early 21st century.

Chris is a little more complex (but you knew that anyway, I mean just look at him). He has three basses on the tour; a six string Ibanez BTB767; his trusty Reverend Dub King; and a brand new Cort fretless.

These go through his pedal board, which we've had to prop up so he can reach it while sat down

1. Morley Volume/Wah Pedal
He normally uses this to get that violining sound on Leave the Light On, The Less Said The Better, You Get What you Deserve etc.

3. Line Splitter
This has two different settings dialled in so if he has to switch between basses he can have the same output level

4. Bass Chorus
Gives that rich and swirly sound, but he doesn't tend to use it with the Reverend as that has quite a chorussy sound anyway.

5. Delay pedal
He occasionally uses this on The Less Said and You Get What you Deserve, and it's always exciting to see if he remembers to disengage it.

6. Auto filter
I have absolutely no idea what this pedal does. He says he might use it one day for Jessica's stuff, but I think he's scared of it.

7. Aguilar ToneHammer
This bad beast gives a bit of a toneshaping - he tends to only use it as a subtle EQ when using the Reverend, but with the Ibanez he uses the AGS button to get some drive into the signal. This is also the DI output that runs into the PA.

This outputs to the amp, which is a little Fender Rumble 100W combo, which even I can lift and I'm only tiny. He was going to use his Orange full stack, but Jessica told him not to be so stupid.

Chris uses his Heil PR35 microphone, which is a truly great and dependable mic. But even still... GIGO, eh? (That's Garbage In Garbage Out to those of us in the know.)

I know that thousands more of you want to know about the desk and how we get the sound out to you, especially those of you unlucky enough to not have tickets for the shows, who have to watch on YouTube. I'll leave that to Percival, as he tends to hog the limelight on that.

Anyway, that's all I've got time for now. I've already eaten so it's time for me to shoot and leave.


Percival's Guide to the audio and video 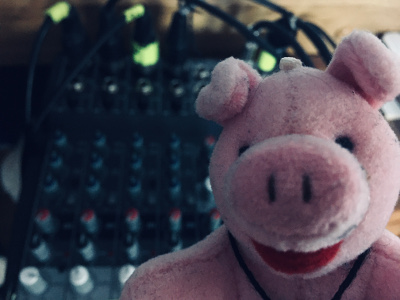 Wotcha, I'm Percival and I'm delighted to be here talking to you about getting Jessica and Chris online and sharing their performances with you!

As you can see, I've put a couple of microphones in front of them. We decided to use dynamic stage mics rather than the studio mics so that we had more controlled balance sent to you. These go over into a little mixer.

Jessica famously uses foot percussion, despite being perched on a high stool, and J and C eventually let me mic up her feet. I've just got the Swiss Army knife microphone, everyone's favourite, an SM57 doing that job.

The guitar and bass are both Direct Injected - Jessica's guitar goes into a small pedal board as Anthony described earlier, which then goes into a DI box, and from there into the mixer.

Chris' bass goes through the pedal board again as Anthony explained - the signal is tapped off from his Tonehammer DI and goes into the mixer - he also has a signal that runs into his amp.

There is no artist foldback, so they don't have any monitoring on stage. The PA is so good, it sounds like they're just singing and playing in a small room. So how do we get the sound and vision to you lovely people not fortunate enough to be at the shows in person?

Well first of all, the signal goes from the mixer into a Focusrite interface, which connects to the laptop.

In the laptop, I run OBS as the external encoder, which then feeds into the YouTube stream. We experimented without using an encoder, but that made it sound like Jess and Chris were under water, and looked like it had been filmed on a potato.

Unfortunately, between them, OBS and YouTube seem to radically change the mix that I get on the mixer, so I have to try and compensate for that. The monitoring for this is a little tricky as the round trip for the audio through OBS / YouTube introduces latency, where the audio is delayed by about 1250 m/s, which is horribly offputting for the artists!

As Jess and Chris keep banging on about it, we have a latency between the pictures we see here and what you see and hear at home - it varies, but it's around 10 seconds.

The video at the moment comes from the laptop because either Trevor the Tour manager or Chris forgot to buy a small HDMI cable to allow us to connect a better camera. So, because of their ineptitude, we're stuck with that weird letterboxed video.

And finally we're stuck with a mobile internet connection that is made of cheese - but it's still better than most venues' wifi!

So that's how all of that happens. We're honing the process as we go, but we're doing the very best we can. Especially as all the crew only have little hands and no opposable thumbs (or special sixth toes). 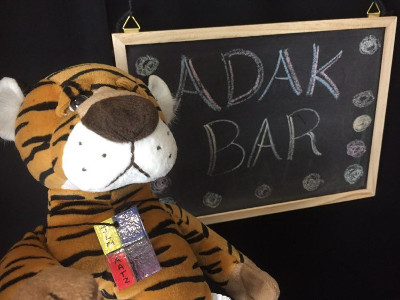 Hello, I'm Trevor, and I am the tour manager for this Time Zone Tour.

I'm in charge of the crew. They're a good crew and they work hard and play harder (Percival...). You know all about Percival and Anthony, but we also have Lamb-py, Winnie, Woolie and Gwdihw.

Lamb-py is our lighting engineer - he also helps out with the backline and other crew jobs. He is known sometimes to dry his woolly jumpers on the lighting pots.

Winnie and Woolly do the admin, merch and PR for the tour. They're also great security and good for moving gear around. They tend to have sore heads in the mornings...

Gwdihw (it's Welsh for Owl) does a lot of production running and also helps out with some crew and admin jobs. He likes to know who everyone is.

I sorted out the venue specs, where we were playing, how we'd get there and how to keep the party fed and watered away from the venues (in Percival's case, perhaps a bit too much of the latter.). There's ensuring the rider is correct (and keeping Percival and Lamb-py away from it before J and C get any of it); making sure the crew are happy and know what they're doing, liaison with the venue management on the day to make sure the local hands know what to do, and ensuring we have everything ready to go.

The other big worry is keeping Jessica and Chris happy, ensuring they know where they are going, get to soundcheck and performance on time, and don't wander off into the night, which is all a worry.

I worry about how time seems to warp when you're on a tour. The artists have these great ideas about what they can do, but the reality of doing all the PR, set planning and simply getting the show on every day takes up more time than they think. There's always grand ideas about how they can carry on as normal during the day, but during the tour heads feel as if they're stuffed with cotton wool and so the focus is just on the shows.

We've played all sorts of venues on this tour, and they're all real places. Google Maps and Wikipedia have been a big help to me, finding out local info and what the venues are like. We've played the Royal Albert Hall at one end of the scale and a small church in an abandoned whaling station in the Antarctic at the other. Every show brings a small band of fans who have followed the tour around the world. I don't know why they do it, but I guess they get something different out of it every night, and they've really bonded despite not all knowing each other beforehand.


Here's where we went. You can see all the trailers on jlmsings.com